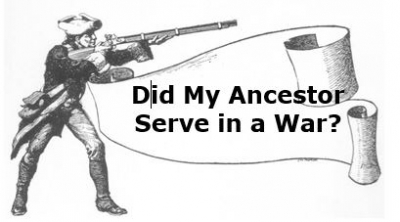 War creates destruction, chaos and scars, but it also creates lots of records that can be a real boon to genealogists. Enlistment papers, muster rolls, regimental histories and especially pension records all provide a wealth of genealogical information. Military information can be found at the federal, state and county level. Because war is such a life changing event there is usually a great deal of interest in recording those memories in letters, diaries, journals and memoirs. Newspaper articles and periodical accounts abound as do books written to understand and preserve the experience. A genealogical goldmine awaits the researcher.

Search home and private sources for discharge papers, medals, citations, old uniforms, photographs in uniform or with units, diaries, and old letters. These and the stories handed down in your family may lead you to the records you seek that are held by governmental entities.

Some military records are maintained at the county level. These include: draft registrations, registration of discharge papers and county militia units (early years). Some military records are under the jurisdiction of the states. To locate these, you will need to ascertain what each state maintains and which agency has control of the records. Some examples of military records that are state records include: Pensions based on confederate service (granted by the states of Alabama, Arkansas, Florida, Georgia, Kentucky, Louisiana, Mississippi, Missouri, North Carolina, Oklahoma, South

Every generation of Americans has been affected by wars. Actual service varied in number up to an estimated 5 million in the Civil War. Even if your ancestor did not serve, a draft or other record may have been created, including interaction between the military and civilians. Determine any major conflicts during which your ancestor lived and check to see what federal records may exist. The following list of major conflicts and wars may help you decide which records to check.

Genealogists most often seek three types of records: 1) military service records; 2) pension claims files; and 3) bounty-land warrant applications. Congress began paying pensions in 1789, but many of the early applications were destroyed by fire in 1800 or the fire in 1814. Bounty-land warrants were authorized as a substitute for wages because Congress did not have funds to pay its soldiers. The warrants were only granted for service in the Mexican and earlier wars, but the application files often contain information similar to the genealogically rich pension files.  The availability of military service and pension records depends upon the war.  In addition to the bounty- land paid by the federal government the states of Connecticut, Georgia, Maryland, Massachusetts, New York, North Carolina, Pennsylvania, South Carolina, and Virginia also paid their soldiers with bounty-land. These state records are indexed by Lloyd DeWitt Bockstruck in Revolutionary War Bounty Land Grants Awarded by State Governments (Baltimore: Genealogical Publishing Co., 1996).

Colonial Wars (1607-1774) -- Records will be found in state and local collections and are widely published and can be found in libraries throughout the US. If available, the information is more historical than genealogical, but does list muster rolls and rosters. Most able-bodied men between the ages of 16 and 60 were expected to participate in a local militia unit. These units were organized either by town, county, or colony. The militia's main role was local defense.

Revolutionary War (1775-1783) – Records for military service, pension and bounty land are at the National Archives for service in the Continental lines. There are very few pension records unless the soldier was killed or wounded, except for those pensioned after 1832. There are many federal bounty land records. Records for service in a state militia are at the state level. Virginia and North Carolina also gave state pensions for those wounded or killed in service.

National Archives. Since most Mexican War veterans also served in the Civil War, there are very few pension records solely for this service.

Civil War Soldiers and Sailors System and is located at <www.itd.nps.gov/cwss>. It is a database that lists Union and Confederate soldiers along with some information about their service.

The following states have pension records for Confederate service. The pensioner did not necessarily serve from that state, but was pensioned from the state in which they lived when they received the pension.

Spanish-American War (1898) & Philippine Insurrection (1899-1902) – Some records for these wars have been microfilmed and the records are available at the National Archives.

World War I and later wars (1914- ) -- These records are restricted to the veteran or next of kin and are at the National Personnel Records Center in St. Louis, MO, with the exception of the 24 million draft registration cards from World War I. These valuable records have been microfilmed and are also online at Ancestry.com for a fee. Another important set of online records is the World War II Army Enlistment Records of about 9 million men and women who enlisted between 1938 and 1946. These are found at

Regular Army – If you do not find your individual in the Volunteer or draftee listings, remember that the service may have been in the regular U. S. Army. These enlistments from 1798 to 1914 have been microfilmed but are separate from the volunteer units.

You may order copies of military service and pension records from 1775 to 1914 from the National Archives online at www.archives.gov or by using their forms. For military service records use form NATF 86 and use NATF 85 for pension and bounty land records requests. The forms may be obtained online, by phone toll free at 1-866-272-6272 (1-86 NARA – NARA) or write to:

The National Archives and Records Administration

To order records of soldiers from wars since World War I, you may use form SF

180 obtained from the local Veterans Administration office or by downloading the form from www.archives.gov or by writing to:

Also, veterans or, if deceased, their next of kin (un-remarried spouse, son, daughter, mother, father, brother, sister) may order their records online at vetrecs.archive.gov or use form SF 180.

Other Sources for Military Records

Newspapers published in the city or county where the ancestor lived prior to enlistment. American Legion, Veterans of Foreign Wars, or American Veterans of World War II local post for information on local people who survived.

The National Archives, online at www.archives.gov

Arranged alphabetically on cards by name of soldier.

Johnson, Lt. Col. Richard S. “How To Locate Anyone Who Is Or Has Been In TheMilitary: Armed Forces Locator Guide.” (San Antonio: MIE Publishing), 1999