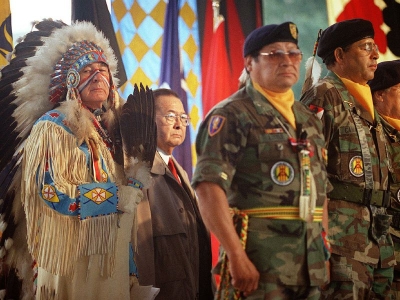 A 1934 Act of Congress established the Oklahoma Historical Society as the custodian for the records ofthe Five Civilized Tribes (Choctaw, Chickasaw, Cherokee, Creek,and Seminole Indians),as well as the Cheyenne and Arapaho Indian Tribes of Oklahoma. In 1978 it was designated as an affiliate ofthe National Archives. It is also an affiliate of the Smithsonian Museum.

It is located in the new Oklahoma History Center across from the state capitol in OklahomaCity. Treasures include many one of a kind historic maps, Lewis and Clark treaties signed by Thomas Jefferson, and many more.

The website fort he American Indian Archives can be accessed at http://www.okhistory.org/research/collections/index.html

Archives Director William D.Welge says “The American Indian Archives consists of federal Indian records placed in the society's custody in 1934 by act of Congress. Containing over 3.5 million documents and some 6,000 plus volumes, it represents 66 of the 67 tribes that eitherwere relocated to Oklahoma by forced removal, or who are native to the state.

Most principal of the collection wil lbe the records of the Five Civilized Tribes. These records of the Cherokee, Chickasaw, Choctaw, Creekand Seminole date from circa 1856  to 1906. The national records of these tribes contain primary documentation oft he executive, legislative and judicial branches as well as district and county records. Extensiveinformation about agriculture,census, citizenship, education, Indian-white relations, law enforcement anda variety of aspects of life in Indian Territory can be found in hese documents

Of special note will be the records of the Dawes Commission, whose primary function was to administerthe enrollment of the citizens and Freedmen (former African-American slaves), of the Five Civilized Tribes in preparation for allotment of land prior to statehood.

Much of the primary records of the Five Civilized Tribes is utilized by individuals researching for ancestors who may have been enrolled by the Dawes Commission. The records allow the researcher to determine if they can qualify for tribal enrollment today. Since the mid-1970s new importance has been placed upon the records of the Five Civilized Tribes.These records provide the only source for determining tribal membership with a tribal entity today.

Using a combination of enrollment records produced by the Dawes Commission, supplemental documentation can be ascertained by searching voluminous records o fthe Five Civilized Tribes for possible linkages from the ancestor to the researcher.” (From the Online Introduction to the Archives at

A Glimpse at the Scope of the MicrofilmHoldings

189 0Census of the Cherokee Nation

Letters sent andr eceived about removal to the west

1890 Census of the Chickasaw Nation

1896 Census of the Chickasaw Nation

There are also documents fromthese otherTribes: Kiowa, Pawnee, Otoe, Tonkawa, Kaw, Ponca, Quapaw, Sac & Fox, and Shawnee.The IndianS chools are included and 80 rolls of microfilmon the Dawes Commission Records.There are Indian Territory Court Records and 72 microfilm rolls of US District Court Records. There are more than 100 microfilms rolls of assorted records relating to Indians and the areas they controlled.

One of the significant collections is the Indian Pioneer Papers. The Indian- Pioneer Papers oral history collection spans from 1861 to 1936. It includes typescripts of interviews conducted during the 1930s by government workers with thousands of Oklahomans regarding the settlement of Oklahoma and Indian territories, as well as the condition and conduct of life there. Consisting of approximately 80,000 entries,the index to this collection may be accessed via personal name, placename, or subject.  It is housed at the University of Oklahoma Western History Collection and has been digitized and is online at http://digital.libraries.ou.edu/whc/pioneer/