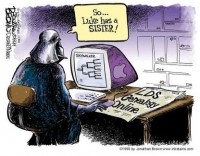 I am often asked “do you do genealogy?”  If I answer, “Yes”, then I have defined myself as a genealogist.  However, even though I use genealogical techniques, I think of myself as a family historian instead.

Why? what is the difference?

My definition of genealogy: “Genealogy is a set of tools and rules for the gathering of statistical information about one’s ancestral lines.”

In this respect, genealogy is a science.  It uses a set of tools for research.  Those tools include methods of obtaining information.  It has rules.  It defines how to record very specific information such as how to enter a name, a date, or a place.

Genealogy’s basic set of information is very simple.  Name of person, Date and Place of Birth, of Marriage, of Death, of Burial.  These are statistics.  However, there are many other facts about an individual that can be obtained such as cause of death, occupation, military service, homes, titles, etc.  These additional facts can number in the hundreds.  This collection of facts can be unlimited,

This collection of facts is history.  It defines the life of the individual.  As such, genealogy research is historical research.  History is defined in the arts, not in the sciences.  The basic question that has been asked many times is: “Is genealogy an art or a science?”

Answer:  Art.  Collection of data may be  structured like science and math is used in the calculation of dates, but the techniques and results create the history of individuals and families.   Much of family history involves logic, the ability to make inferences based upon examination of information.  The following is a case study of a hypothetical family.  There are decisions that you must make using logic – an art.

You have found a letter in a family bible written by an ancestor, a great-great aunt.  The letter reads:

“My Dad George Alexander Johnson of Leesburg was married twice.  Both of his wives were named Elizazbeth.

Besides me, we had the following children in the family

It was signed by Florence Smith

Was Florence one of the children?

Was Florence married? If so, what was her husband’s surname?

Were both of George’s wives Mrs. Elizabeth Johnson?

Now we have a problem, if there were two wives and ten kids, and both wives were Elizabeth, which wife does each child belong to?

Time for some research.  Using our genealogy tools, we check marriage, birth and death records.

We looked at some difference census and county histories and find that there was only one George Alexander Johnson who lived near Leesburg.  This helps.

Using Logic:        Is it likely that any birth records that list the parents as George Alexander and Elizabeth Johnson will be our George?

In the Leesburg United Methodist Church.

Using logic:         Is it likely that George and his wives lived in Leesburg, or very nearby?

Could George be the Pastor of the Leesburg UMC?  Yes, no, maybe?

We found a death record for Elizabeth Brown Johnson who died 11 Aug 1886.

Using logic:  Could all ten children have belonged to Elizabeth Brown? why or why not?

We found birth records as follows:

Oh no, we didn’t find a birth record for Daisy!

Where did Daisy fit into the family?

Can you now fit all children to the proper parent?

Did Florence use nicknames in her letter?

Is Polly Mary or is Polly Daisy?

Could George have divorced Elizabeth Brown?

How did Elizabeth Brown Johnson die?

As you can see the collection of genealogy facts is scientific in nature, but being able to assemble the information correctly is art.  It requires the use of logic.  The hypothetical case above illustrates this.

I am not sure where I obtained the following article and have not been able to find it again using a Google Search. It has been on my PC for many years and I have used the information in workshop discussions. I suspect it may have come from Val D. Greenwood's exposition in the first edition of The Researcher's Guide to American Genealogy. I have taken poetic license with the article and a few of the comments are mine.

Is Genealogy a Science?
In some important ways, "Yes" ...,

Genealogical research is scientific research in some important ways:  Like other sciences, the findings of genealogy are based on probability. Just as biologists may report on empirical studies by telling us that there is a 95 or 99 percent probability that a condition isn't caused by something other than the cause being tested, the genealogist finds probable answers to research questions by ruling out other possibilities, using the best possible data sources.

o Like other scientists, the genealogist must carefully document the study so that other researchers are able to replicate the study and end up with the same results.

o Genealogy has embraced the technological language of science and information technology. Terms like data, database, data entry, research, reliability, validity, and so on, are part of the genealogist's daily conversation.

On the other hand, some features of genealogical research differ from other forms of scientific research.

o The genealogist is interested in anecdotes, stories, family legends, photographs, heirlooms, and other material beyond pure facts.

o The genealogist doesn't typically set up an experiment, comparing two or more factors, but instead relies on conclusions based on accumulated data.

o Genealogy is not considered a degree program per se with grant funding. However, with the ability to determine ancestral origins by DNA analysis, fields such as anthropology, history, linguistic studies, genetics and genetic disease research are often closely associated with genealogical research.

o In these ways, the genealogist's research is closer to the observational studies of the zoologist, historian or sociologist, than to the type of methods employed by psychologists, physicists or biologists.

Genealogy provides tools for doing research.  The proper designation should be Family History and be a sub-category of the study of history.  If taught at the university level, it would be in the area of humanities, in the History Department.  Therefore art, not science.