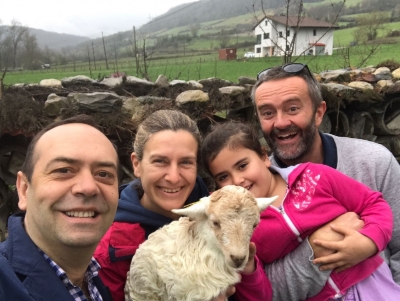 New DNA research claims we may have more in common with the English than we thought - we both descend from Basques. Perhaps that explains the swarthy Welsh looks, says Catherine JonesLIKE a miner or a steelworker, many of the Welsh have got one of them somewhere in their family tree.Yes, a picture of someone who has the dark eyes, hair and colouring of a "foreigner" - often causing the family to think there must have been some "exotic" influence way back when.The Welsh sometimes seem easily categorised on a superficial level. You either have the dark, swarthy customers with near-black eyes or the pale- skinned, finer-boned lot with beautiful, startling blue eyes.Pair the two together in a marriage and you can still get a brood with the curly dark locks, insolent dark eyes and chunky brown limbs of one of those spoilt Mediterranean fat kids you see running about piazzas in the evenings.How many Welsh families like to have a bit of a joke about something "rum" in one of the parents' family trees?How else to explain the fact their children turn "black" in a bit of sun and all get mistaken for French/Spanish/Italian depending on which country is the holiday destination of choice?The more fun the family, the better the story they concoct to explain the beady black eyes staring out of a sepia family photo."Looks like a Portuguese sailor," say some, looking round at the modern-day mob with their pale eyes and skin, and wondering where the heck he came from. Or where they came from.Perhaps one parent - usually fair-skinned - makes mischief with haughty references to "your father's family", as though it's awash with Romanian Gypsies who "came over" in wagons to flog pegs.Or, if you hail from West Wales, there's the Spanish ships wrecked on Pembrey Sands routine.If you come from Llanelli and you're dark of skin and eye, you've probably heard the one about the Italian ice cream parlour owners - and how your Great Aunty May got taunted at school for looking like a senorita.But what is the truth of our origins? Over to Professor Stephen Oppenheimer of Oxford University, who says some 81% of the Welsh have DNA evidence which shows a common link to ancestors who came to Britain from northern Spain many thousands of years ago.In fact, many Britons share a gene pool that can be traced back to Basque. Around three-quarters of the Welsh, Scots and English can be traced to those who arrived from the Basque country between 7,500 and 15,000 years ago.Based on research into DNA studies across the UK and Ireland over the past 10 years, the professor's theory on British origins challenges mainstream historical views. And it might horrify those who like to think they are a distinct race apart from the English.Most people in Scotland, Ireland and Wales were assumed to be descended from Celtic farming tribes who migrated here from central Europe up to 6,500 years ago. The English were thought to largely take their genetic line from the Anglo-Saxon invaders of the Dark Ages who supposedly wiped out the Celts in England.But that's all part of a "Celtic myth", says Professor Oppenheimer in The Origins of the British: A Genetic Detective Story."The majority of the gene pool of the British Isles is very ancient and dates to the era after the last great Ice Age. It has nothing to do with Celts or Anglo-Saxons or any more recent ethnic labels."The Ice Age made Britain a polar desert and there was nobody living here around 13,000 BC until the first settlers came to the British Isles from the Basque country of northern Spain between 15,000 and 7,500 years ago."Something like three-quarters of the ancestors of our modern gene pool arrived then."The ancestors of some 88% of the Irish, 81% of the Welsh, 79% of the Cornish, 70% of Scots and 68% of the English arrived here during that period. None of the later immigrations contributed anything more than 5% to the gene pool."So genetically speaking, according to the Professor, a member of Green College, Oxford, the Welsh have more in common with the English than they have differences."There is also no evidence of Celtic languages being spoken until much later, so most of these people probably spoke something like Basque, and though it is controversial, there is structural evidence of Basque influence on later Celtic languages and English as well."Some historians believe cultural, political and social differences were much more significant in the development of the British peoples and many may dispute Prof Oppenheimer's theory that the first settlers, arriving around 9,000 years ago, came from one specific area as being very restrictive.

But Aberystwyth-born geneticist, Prof Steve Jones, concurs with the latest findings, saying the Welsh and the Irish are among the most homogeneous people in the world - though they remain mark- edly different from the English.

Prof Jones and colleagues at University College London, spent years creating a genetic map of the Y chromosome, which is passed by males from generation to generation.

The results show the Welsh are related to the Basques of northern Spain and southern France and to native Americans. All are descended from the Kets people of western Siberia.

Prof Jones, author of Y - The Descent of Man, said the Y chromosomes showed a marked difference between males on the Welsh and English side of the border.

"This shows that in the Dark Ages, when the Anglo-Saxons turned up, there was the most horrible massacre on the English side. They killed everybody and replaced them.

"The Welsh Y chromosome is similar to that of the Basques. In the male line, at least, the Welsh and the Basques are survivors or relics of a period before huge numbers of farmers filled Europe from the Middle East.

"There has been much less inter-breeding in Wales than you might expect. Wales and Ireland have the most homogenous group of males anywhere in the world."

The genetics show that the Welsh are not related to the Cornish, despite the similarity of their languages. "The Cornish are in effect Anglo-Saxons who for a time used a language that was hanging around."

The genes of Scottish males also showed considerable inter-mixing with outsiders. Prof Jones said genetics provided more reliable clues to the distant past than language. He said the Y chromosome common among Welsh males was an ancient one.

In 2001, scientists at the University of London, led by Professor David Goldstein, discovered that Welsh and Irish Celts were the "genetic blood-brothers of Basques".

Researchers concluded that the gene patterns of the three races passed down through the male line were all "strikingly similar".

Basques can trace their roots back to the Stone Age and are one of Europe's most distinct people, fiercely proud of their ancestry and traditions.

The research added to previous studies which have suggested a possible link between the Celts and Basques, dating back tens of thousands of years.

"The project started with our trying to assess whether the Vikings made an important genetic contribution to the population of Orkney," said Prof Goldstein, who was working on a BBC television programme on the Vikings.

He and his colleagues looked at Y-chromosomes, passed from father to son, of Celtic and Norwegian populations, and found them to be quite different.

"But we also noticed that there's something quite striking about the Celtic populations, and that is that there's not a lot of genetic variation on the Y-chromosome," he said.

"On the Y-chromosome the Celtic populations turn out to be statistically indistinguishable from the Basques," Professor Goldstein said.

The comparison was made because Basques are thought by most experts to be very similar to the people who lived in Europe before the advent of farming.

"We conclude that both of these populations are reflecting pre- farming Europe," he said.

But it remains unclear whether the link is specific to the Celts and the Basques, or whether they are both simply the closest surviving relatives of the early population of Europe.

What is fact is that the Neolithic Celts took women from outside their community. When the scientists looked at female genetic patterns, they found evidence of genetic material from northern Europe - an influence which helped "even out" some of the genetic differences between the Celts and their Northern European neighbours.

Is there really a similarity between the Basques and the Welsh? We tried out the credentials of  2 'typical' men

Looks: Tall, dark and handsome, it's hardly surprising Rhondda-born Steve's CV includes modelling for Versace and Esquire. With his dark hair, winning smile and solid Welsh physique, he won himself a top presenting job on Channel 4's T4 and a legion of female fans. Achievements: In addition to becoming a top model, he's interviewed (and wooed if rumours are to be believed) some of the world's top celebrities. But he's also more than just a pretty face. Before finding fame he was the number one squash player for South Wales under-19s and captain of the under-18s football squad.

Looks: His hair line might be starting to recede, but one thing Severiano Ballesteros hasn't lost are his playboy good looks. Trim, dark and broodingly handsome, it's not just his looks that betray his Spanish roots. The sportsman is known for his Basque pride and fiery Latin temperament. Achievements: A man of action, Seve learned to play golf as a boy, practising with his older brother's three-iron on a beach near his home. By the 1970s he'd become a leader in his sport and in 1979 became the youngest Open Champion of the modern era when he won the first of his five majors.

Famous BasquesPaco Rabanne, fashion designerAfter fleeing Spain for France when the Spanish Civil War broke out, the architect-turned-fashion designer started his career creating jewellery for Givenchy, Dior and Balenciaga before opening his own fashion house in 1966. The 72-year-old is known for his flamboyant designs, unconventional materials and impressive costume designs.

Roland Orzabal, musicianBorn in Portsmouth in 1961, Roland is famous for establishing 1980s pop band Tears for Fears alongside Curt Smith, and for writing the hit Mad World. He has an English mother and a Parisian father of Argentinean and Spanish parents, so is fluent in English, French and Spanish.

Xabi Alonso, footballerThe 25-year-old Liverpool FC central midfielder was signed by Rafael Ben tez for £10.5m and has a reputation for scoring spectacular long-range goals. Nicknamed the "midfield maestro" he is considered by many to be one of the best midfielders in European football, and played for Spain in the 2006 World Cup.

Imanol Harinordoquy, rugby playerGrowing up in St-Jean-Pied-de-Port, Imanol Harinordoquy was a keen swimmer who also played pelota and football and did judo. A knee injury at the age of 14 put an end to his football dreams, but now he plays as a number 8 for Biarritz and for France, and is considered one of the top number eights in international rugby union.

Eva Peron, Argentine first ladyFamously played by Madonna in the Hollywood blockbuster Evita, Maria Eva Duarte de Peron was the First Lady of Argentina from 1946 until her death in 1952. She began life as an actress, before meeting Colonel Juan Peron in 1944 at a charity event and going on to have a powerful political career of her own.

So where did the language come from?Historians point out the connection between modern Celtic languages and those spoken in south-west Europe during Roman times. Caesar wrote that the Gauls living south of the Seine called themselves Celts and that area, in particular Normandy, has the highest number of ancient Celtic place-names and Celtic inscriptions in Europe.

Were Celtic languages spread by a raft of agriculturalists who, 7,000 years ago, travelled along the north coast of the Mediterranean to Italy, France, Spain and then up the Atlantic coast to the British Isles?

Medieval Gaelic literature is said to offer more argument for the Mediterranean origins of Celtic invaders. Irish legend says all six of the cycles of invasion of the British Isles came from the Mediterranean via Spain, during the late Neolithic to Bronze Age.