Formation of the United States 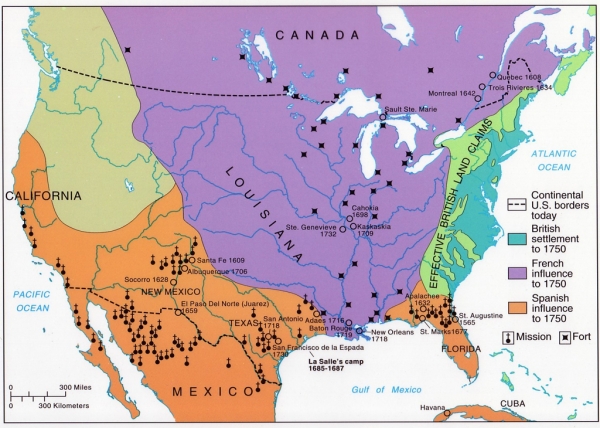 Part I - The following discussion provides historical data to assist the genealogist in not only identifying historical locations, but to provide clarity in research.

Part II - Provides a chart showing information about all 50 states including dates of admission into the union, alignment during the civil war, and colonial or territorial status.

As we pursue genealogical research, we soon find that recorded locations can be confusing. A town shown in Virginia in a census may now be located in West Virginia or even Pennsylvania. Why is this so?

The genealogist must acquire a sense of history in order to understand these shifts. For instance, what is the Mason-Dixon line and how did it affect state boundaries? When did West Virginia become a state? Which of today’s states were in the Northwest Territory. Which states were included in the Louisiana Purchase?

When colonists first came to America, most of the continent was unexplored. Thirteen Colonies were formed, but their boundaries were not the same as when they achieved statehood. For instance, the area we now know as Kentucky was part of Virginia, as was West Virginia. To the west lay territories claimed by Spain, France, England, and eventually by the United States. To the South lay Florida, claimed at various times by Spain and England.

Depending on the date in the record, a location may have been a colony, a state, a territory, or perhaps a province.

The dilemma facing the genealogist is what is the proper way to record the place name. Do we enter it as where the records would be located today, or maintain historical accuracy?

Although not being addressed in detail in this article, the same thing occurred worldwide. (and is still occurring). Europe’s history has been especially volatile with wars and alliances creating many shifts in boundaries and creation of nations. Examination of the Caribbean islands shows many changes. Central and South America changed from Spanish territory to independent nations. Siam, Burma, East and West Pakistan. Australia and New Zealand were once British Colonies, etc. The list goes on and on.

My feeling has been that the various companies that sell genealogy software should change the programs so that all date/place fields reflect two date/places, historic and current. Thus the problem would be solved. The place shown in the source record could be shown and also where that place is today. However, until that occurs – there are two ways to handle the problem:

This becomes more important as we enter dates before the American Revolution. Before July 4, 1776, there was no United States. There were 13 American colonies of Great Britain. The Province of Maine was part of the Massachusetts Colony, and Vermont was split between the New York and New Hampshire Colonies. We accept July 4, 1776 as the date of the creation of the nation. This is so, but to be legally correct, the entry of each colony did not occur until it ratified the U.S. Constitution. So historically, Delaware was the first state. However, for all intents and purposes, July 4, 1776 is accepted as the date when the colonies became states.

Royal charter established the boundaries of the thirteen colonies. Border disputes often arose. Charles Mason and Jeremiah Dixon surveyed theMason–Dixon Line(orMason and Dixon's Line) between 1763 and 1767. The survey formed a demarcation line among four U.S. States, forming part of the borders of Pennsylvania, Maryland, Delaware, and West Virginia (then part of Virginia).

The Missouri Compromiseof 1820 made the first official use of the term Mason-Dixon line and became a symbolic line separating the North from the South.

In February 1779 during the Revolutionary War, George Rogers Clark of theVirginia Militia captured Vincennes, Indiana from British commander Henry Hamilton. Virginia capitalized on Clark's success by laying claim to the whole of the Old Northwest, calling it Illinois County, Virginia, until 1784, when Virginia ceded its land claims to the federal government.

The Territory Northwest of the River Ohio, more commonly known as the Northwest Territory, was an organized incorporated territory of the United States that existed from July 13, 1787, until March 1, 1803, when the southeastern portion of the territory was admitted to the Union as the state of Ohio.

The Congress of the Confederation enacted the Northwest Ordinance in 1787 to provide for the administration of the territories and set rules for admission as a state. The territory included all the land of the United States west of Pennsylvania and northwest of the Ohio River. It covered all of the modern states of Ohio, Indiana, Illinois, Michigan, and Wisconsin, as well as the northeastern part of Minnesota.After 4 Jul 1800 only Ohio was still in the Northwest Territory. All other included states were placed in the Indiana Territory, but were unofficially known as their own territories.

The Louisiana Purchase of 1803 encompassed all or part of 14 current U.S. states and two Canadian provinces. The land purchased contained all of present day Arkansas, Missouri,Iowa, Oklahoma, Kansas, Nebraska, parts of Minnesota that were west of the Mississippi River, most of North Dakota, nearly all ofSouth Dakota, northeastern New Mexico, the portions of Montana, Wyoming, and Colorado east of the Continental Divide, and Louisiana west of the Mississippi River, including the city of New Orleans. (The Oklahoma Panhandle and southwestern portions of Kansas and Louisiana were still claimed by Spain at the time of the Purchase.) In addition, the Purchase contained small portions of land that would eventually become part of the Canadian provinces of Alberta and Saskatchewan. The purchase, which doubled the size of the United States, comprises around 23% of current U.S. territory. Ownership prior to the purchase was as follows: 1801-1803 France - Before 1801 Spain.

The Alaska Purchase was the acquisition of the Alaska territory by the United States from Russia in the year 1867 by a treaty ratified by the Senate. The purchase, made at the initiative of United States Secretary of State William H. Seward, gained 586,412 square miles (1,518,800 km2) of new United States territory. Originally organized as the Department of Alaska, the area was successively the District of Alaska and the Alaska Territory before becoming the modern state of Alaska upon being admitted to the Union as a state in 1959.