Mexico, officially the United Mexican States, is a country located in the southern portion of North America, covers a period of more than two millennia. First populated more than 13,000 years ago, the country produced complex indigenous civilizations before being conquered by the Spanish in the 16th century. 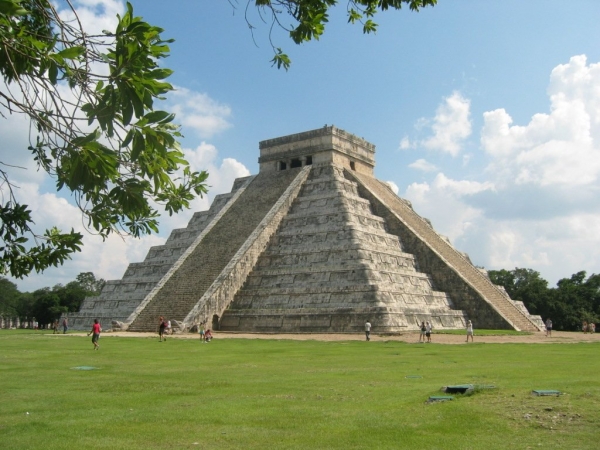 Since the Spanish conquest, Mexico has fused its long-established native civilizations with European culture. Perhaps nothing better represents this hybrid background than Mexico's languages: the country is both the most populous Spanish-speaking country in the world and home to the largest number of Native American language speakers on the continent. 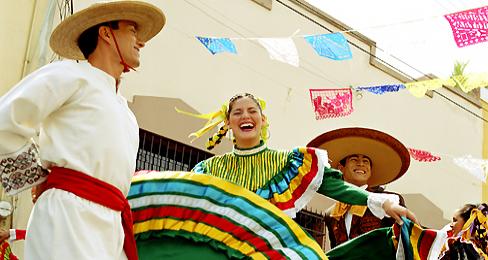 From 1519, the Spaniards absorbed the native peoples into Spain's vast colonial empire. For three centuries Mexico was just another kingdom (the New Spain) of the Spanish Empire, during which time its indigenous population fell by more than half and was partially replaced by Spaniards and the now predominant Mestizos or mixture of Indigenous and Spanish populations. It was also then that the current Spanish-speaking, Catholic and Westernized Mexican culture was born. After a protracted struggle Mexico declared its independence from Spain in 1810. In 1846, the Mexican American War broke out, ending two years later with Mexico ceding almost half of its territory to the United States. Later in the 19th century, France invaded Mexico (1861) and set Maximilian I on the Mexican throne, which lasted until 1867.  Little had been done for the nation's poor, and they revolted in the Mexican Revolution (1910–1929). Roaming armies killed a tenth of the nation's population, but the Revolution freed the peons from the system of large haciendas that had originated with the Spanish Conquest.

The first Europeans to arrive in what is modern day Mexico were the survivors of a Spanish shipwreck in 1511. On 8 February 1517 an expedition led by Francisco Hernández de Córdoba left the harbor of Santiago de Cuba to explore the shores of southern Mexico. This was the Europeans' first encounter with an advanced civilization in the Americas, with solidly built buildings and a complex social organization which they recognized as being comparable to those of the Old World.

Hernán Cortés led a new expedition to Mexico landing ashore at present day Veracruz on 22 April 1519, a date which marks the beginning of 300 years of Spanish hegemony over the region. 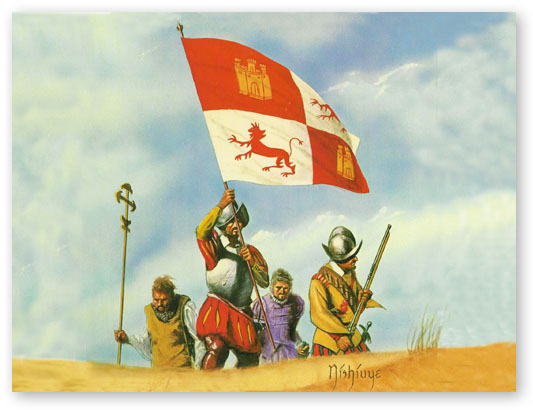 During the three centuries of colonial rule, less than 700,000 Spaniards, most of them men, settled in Mexico. The settlers intermarried with indigenous women, fathering the mixed race (mestizo) descendants who today constitute the majority of Mexico's population. The following map shows the extent of Mexican territory in 1821. 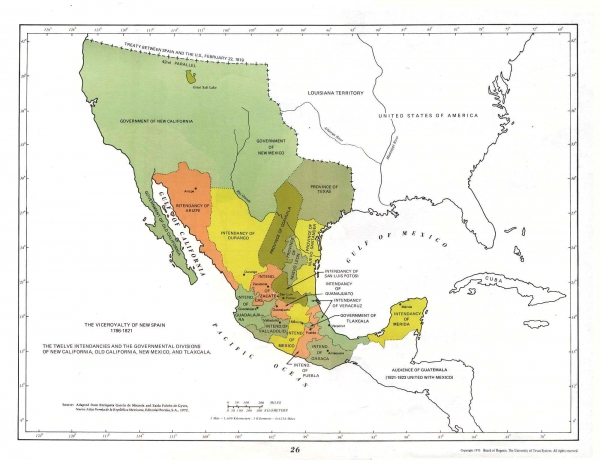 After 300 years and the loss of Mexican Territory in what is the present United States following the war with Mexico, present-day Mexico has 31 Federal States and a Federal District (like Washington, D.C.)  The following map shows present day Mexico.

Mexico existed as Spanish territory before Independence and the formation of Mexico was a result of different Spanish Colonies in the New World either fighting or appealing to Spain for territorial boundaries.  I have included a little information about each state in Mexico, but is recommended that the reader click on the various states (they are links) and read about that state in greater detail, especially in light of the various indigenous peoples who occupied the area and intermarried with the Spanish colonists.

The following is a list of the States of Mexico:

Belize formerly British Honduras, is a country located on the north eastern coast of Central America. It is the only country in the area where English is the official language, although Kriol and Spanish are more commonly spoken. Belize is bordered to the north by Mexico, to the south and west by Guatemala and to the east by the Caribbean Sea.  English and Scottish settlers and pirates known as the Baymen entered the area in the 16th and 17th century respectively and established a logwood trade colony in what would become the Belize District. Baymen first settled on the coast of Belize in 1638, seeking a sheltered region from which they could attack Spanish ships. The settlers turned to cutting logwood during the 18th century. The wood yielded a fixing agent for clothing dyes that was vital to the European woolen industry. The Spanish granted the British settlers the right to occupy the area and cut logwood in exchange for an end to piracy.

Costa Rica  meaning "rich coast" in Spanish), officially the Republic of Costa Rica (Spanish: República de Costa Rica, is a country in Central America, bordered by Nicaragua to the north, Panama to the southeast, the Pacific Ocean to the west, and the Caribbean Sea to the east.  During most of the colonial period, Costa Rica was the southernmost province of the Captaincy General of Guatemala, which was nominally part of the Viceroyalty of New Spain (i.e., Mexico), but which in practice operated as a largely autonomous entity within the Spanish Empire. Costa Rica's distance from the capital in Guatemala, its legal prohibition under Spanish law to trade with its southern neighbors in Panama, then part of the Viceroyalty of New Granada (i.e., Colombia), and the lack of resources, such as gold and silver, made Costa Rica into a poor, isolated, and sparsely inhabited region within the Spanish Empire.

El Salvador is the smallest and the most densely populated country in Central America.  In 1520 the indigenous population of the territory had been reduced by 80% due to the smallpox epidemic that affected the Mesoamerican area. The Spanish Admiral Andrés Niño led an expedition to Central America and disembarked on Meanguera island, which he named Petronila, in the Gulf of Fonseca, on May 31, 1522. Thereafter he discovered Jiquilisco Bay on the mouth of Lempa River. This was the first known visit by Spaniards to what is now Salvadoran territory. Permanent Spanish settlement occurred in 1527. After arriving in what was named the New World, the Spanish started several expeditions to Guatemala, beginning in 1519.

Guatemala, officially the Republic of Guatemala (Spanish: República de Guatemala is a country in Central America bordered by Mexico to the north and west, the Pacific Ocean to the southwest, Belize to the northeast, the Caribbean to the east, and Honduras and El Salvador to the southeast. Guatemala became independent from Spain in 1821. After it became an independent country in its own right, it was ruled by a series of dictators,  It is now a representative democracy.  During the colonial period, Guatemala was an Audiencia and a Captaincy General of Spain, and a part of New Spain (Mexico). The first capital was named Tecpan Guatemala, founded on July 25, 1524 with the name of Villa de Santiago de Guatemala and was located near Iximché, the Kaqchikel capital city.

Honduras  is a republic in Central America. It was at times referred to as Spanish Honduras to differentiate it from British Honduras, which became the modern-day state of Belize. Much of the country was conquered by Spain which introduced its now predominant language and many of its customs in the sixteenth century. It became independent in 1821 and was for a time under the Mexican Empire. After 1838 it was an independent republic and held regular elections. It has been a republic since the end of Spanish rule.  Honduras was first organized as a province of the "Kingdom of Guatemala" .

Nicaragua, officially the Republic of Nicaragua (Spanish: República de Nicaragua), is the largest country in the Central American isthmus, bordering Honduras to the north and Costa Rica to the south. The Spanish Empire conquered the region in the 16th century. Nicaragua achieved its independence from Spain in 1821. Since its independence, Nicaragua has undergone periods of political unrest, dictatorship, and fiscal crisis. It was not until 1524 that the first Spanish permanent settlements were founded. In 1536, the Viceroyalty of New Spain was established. By 1570, the southern part of New Spain was designated the Captaincy General of Guatemala. The area of Nicaragua was divided into administrative "parties" with León as the capital. In 1610, the Momotombo volcano erupted, destroying the capital. It was rebuilt northwest of what is now known as the Ruins of Old León. During the American Revolutionary War, Central America was subject to conflict between Britain and Spain, as Britain sought to expand its influence beyond coastal logging and fishing communities in present-day Belize, Honduras and Nicaragua. The Captaincy General of Guatemala was dissolved in September 1821 with the Declaration of Independence of the Mexican Empire, and Nicaragua became part of the First Mexican Empire. After the monarchy of the First Mexican Empire was overthrown in 1823, Nicaragua joined the newly formed United Provinces of Central America, which was later renamed as the Federal Republic of Central America. Nicaragua finally became an independent republic in 1838.

Panama,  Spanish: Panamá, officially the Republic of Panama (Spanish: República de Panamá), is the southernmost country of Central America. Situated on the isthmus connecting North and South America, it is bordered by Costa Rica to the west, Colombia to the southeast, the Caribbean to the north and the Pacific Ocean to the south. The capital is Panama City. Explored and settled by the Spanish in the 16th century, Panama broke with Spain in 1821 and joined a union of Nueva Granada, Ecuador, and Venezuela, named the Republic of Gran Colombia. When Gran Colombia dissolved in 1831, Panama and Nueva Granada remained joined. Nueva Granada later became the Republic of Colombia. With the backing of the United States, Panama seceded from Colombia in 1903, allowing the Panama Canal to be built by the U.S. Army Corps of Engineers between 1904 and 1914. In 1977, an agreement was signed for the complete transfer of the Canal from the United States to Panama by the end of the 20th century.